Surgeons in other cities of Nevada

The Importance of Las Vegas for Cosmetic & Beauty Shows and Conventions

In a city that extols indulgence like Las Vegas, beauty shows and cosmetic surgery symposiums fit right in. The most important of these shows feature popular technologies and procedures like breast implant innovations, minimally invasive liposuction options, as well as the latest methods being used for the Brazilian butt lift. Las Vegas is definitely the place to go to see it all in one location. The only real challenge for professionals is choosing which of the cosmetic shows or symposiums to attend.

In 2016 and 2017, there’s a very respectable line-up of beauty conventions and shows for salon owners and other beauty professionals. The International Beauty Show (IBS) is one of the fastest growing in the nation, hosting over 21,600 beauty professionals and an interesting line-up of educational offerings. Cosmoprof North America (CPNA) is another, smaller business-to-business beauty event in Las Vegas featuring about 1,000 exhibitors. Cosmoprof features fewer exhibitors, but it’s the most awarded beauty event in the Americas, so put the July, 2017 dates on your calendar and plan to attend.

The 19th Beauty Expo USA already took place on January 16th and 17th in 2017 featuring both hair and beauty industry innovations but there’s still time to sign up for the International Esthetics, Cosmetics, and Spa Conference scheduled for June 24-26, 2017 with over 600 exhibitors and free classes available to professionals. Las Vegas beauty conferences and shows allow cosmetologist and beauty professionals the opportunity to stay updated on cutting edge trends and innovations.

As with salon owners and cosmetologists, cosmetic and plastic surgeons can also benefit from a trip to Las Vegas for symposiums to learn more about the latest technologies in cosmetic treatments. The Bellagio will be hosting the Cosmetic Surgery Symposium between June 7th to 11th, 2017, which features facial cosmetic surgery, aesthetic dermatology, marketing, and body contouring seminars to further educate physicians on the latest and greatest in the most popular surgical treatments such as breast augmentation using fat transfer or the Brazilian butt lift. Las Vegas is also hosting the Cosmetic Surgery Forum on November 29th through December 2nd, in 2017. In January, 2016, the ASAPS Las Vegas Aesthetic Symposium took place at the Cosmopolitan.

If you’ve missed out on a few of the beauty and cosmetic surgery offerings this year, don’t sweat it! There are still plenty of other opportunities available this year. Many beauty professionals as well as surgeons flock to the educational seminars and workshops to learn more about the latest trends in hair care as well as new technologies related to facial enhancements, the latest in liposuction treatments, and fat transfer protocols for the Brazilian butt lift. Las Vegas definitely has it all when it comes to educational and business-to-business beauty and cosmetic conferences.

Las Vegas among the Top 10 Cities in Plastic Surgery

According to a recent RealSelf study, Las Vegas ranks among the top 10 cities in plastic surgery. The reasons behind why the city rank so high aren’t entirely clear, but it seems probable that the higher disposable income of city-dwellers may have something to do with it along with the fact that Vegas is an image-conscious locale. Patients in this city are seeking out everything from dermatological treatments to breast augmentation procedures and the ever-more-popular Brazilian butt lift. Las Vegas seems to require a certain level of commitment to one’s image that other cities in the U.S. don’t value as highly.

Other cities listed in the top 10 in the U.S. include Miami, Sacramento, and more surprising locations like Norfolk, Virginia. San Antonio, Jacksonville, and Atlanta are also among the highest ranked in terms of their interest in surgical cosmetic procedures. Some experts believe that social media and the movement toward greater body positivity may have spurred the increasing interest in procedures like liposuction and the Brazilian butt lift. Las Vegas is a city where there are plenty of celebrity endorsements of cosmetic treatments to help fuel the plastic surgery craze too. What actually motivates people to get interested in plastic or cosmetic surgery remains a mystery though.

Most of the patients who are interested in plastic surgery are between the ages of 25 and 45 years of age. Several years ago, breast augmentation was the most commonly sought-after surgical procedure, but more and more women today and looking into the Brazilian butt lift. Las Vegas residents are particularly interested in fat transfer procedures because they lead to natural-looking results with a natural feel and permanence, though tummy tucks, and breast implants are still popular in the city.

Though there are a number of different factors that can motivate people to seek out cosmetic procedures, selfies are among the most surprising. The recent increase over the past decade in the number of people who are seeing themselves on camera has apparently spurred a rise in the number of people who want to surgically change certain aspects of their appearance according to Las Vegas doctor, Christopher Khorsandi. Selfies have made people more aware of how they actually look, which, according to Dr. Khorsandi, has made them more insecure and more willing to go out on a limb for change.

“The fact that we have cameras with us all the time has created an increased awareness of our own features,” said Dr. Khorsandi. For example, one of the procedures that’s been on the rise lately is the Brazilian butt lift. Las Vegas is ranked among the top 10 cities in the United States for procedures like liposuction and breast augmentation, but the Brazilian butt lift has become more popular in part because people are seeing themselves from behind and realizing that they don’t like what they see.

In support of Dr. Khorsandi’s observations, the American Academy of Facial Plastic and Reconstructive Surgery noted in a recent poll that one in three of the organization’s members noted an increase in request for certain surgical procedures because patients expressed concerns about their appearance on social media. Often, patients will show their plastic surgeon a selfie during the initial consultation as testament of the surgical changes that need to be made. Selfie can be helpful to doctors in deciding on an approach based on the patient’s desired outcome.

Dr. Khorsandi notes that selfie-shaming is ubiquitous, but that it isn’t necessarily healthy or an indication that surgery is necessary. “You can load the picture onto the screen and decide what you don’t like. That’s like shaming patients on a different level. It’s almost like, show me all your fears. Show me all your flaws. It’s not the way I would do things, but it might be what we’re doing at home with our selfies.” If you see some sagging in your nether-regions in a selfie-pic, does that automatically mean that you need a Brazilian butt lift? Las Vegas doctor, Khorsandi says, “It depends.” Most people don’t want to improve only their appearance based on one selfie. They want to feel good about themselves. They want to change the way they see themselves overall. “Those are the best candidates for a procedures like breast augmentation or the Brazilian butt lift.” 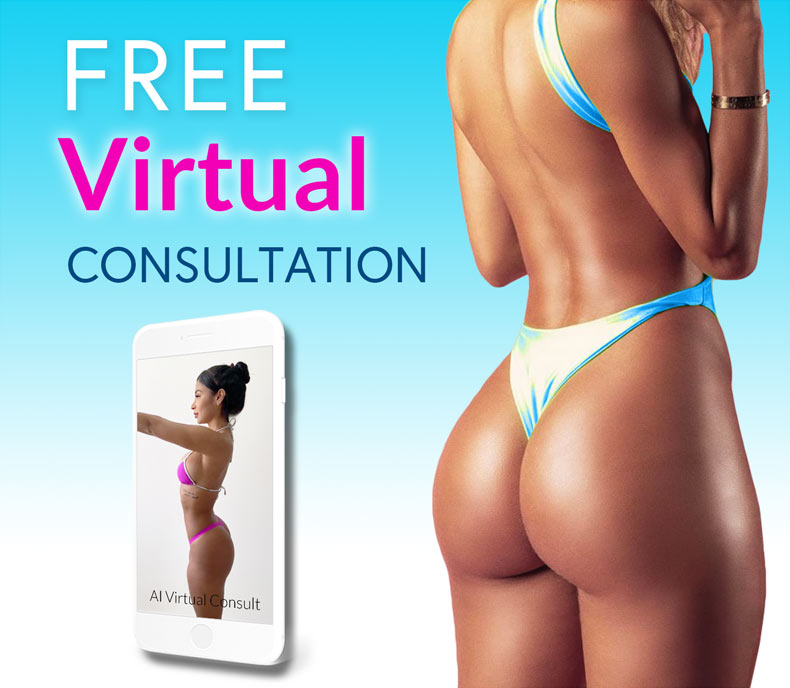